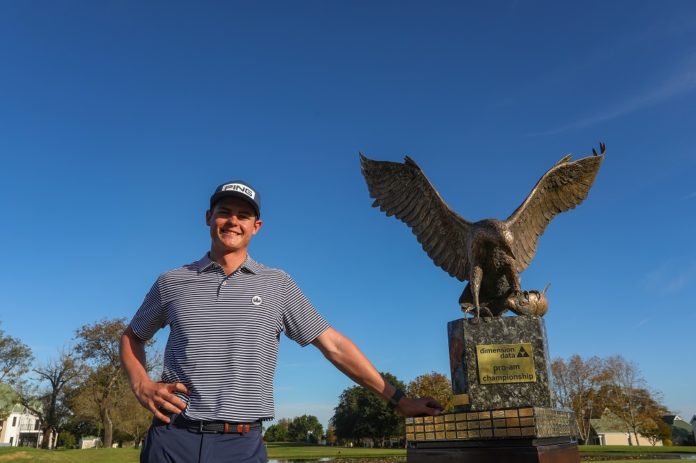 Wilco Nienaber battled to find an accurate drive in the play-off on Sunday in the Sunshine Tour’s and Challenge Tour’s Dimension Data Pro-Am on the Montagu course at Fancourt, and, in the end, that was not enough to stop him pulling off his maiden professional victory.

On the third play-off hole, he had two putts to win, and he took the opportunity with both hands after his birdie on the final hole got him into the play-off with Sweden’s Henric Sturehed. He cosied his 25-footer for birdie up close, and then tapped in for par to take advantage of the Swede going out of bounds off the tee in the third play-off hole.

“It’s not the nicest finishing hole if you’ve got some butterflies in your stomach, but I knew I was hitting it well and I just wanted to give myself a chance,” said Nienaber. “It’s basically like match play. After I missed out the first time, I wondered if I was going to get the opportunity again. I finally got it.”

The win is going to get him into the World Golf Championship-FedEx St Jude Classic in August, and, if hasn’t already by then, Nienaber is going to blow American fans away with his distance off the tee.

It was that very characteristic which nearly cost him his chance in the play-off. While the advantages of being 60 to 70 metres longer than your opponent off the tee in a ‘match play’ situation are obvious, there is much to be said for keeping the ball on the fairway. And, not once in three journeys down the 18th for the play-off, did he keep it on the closely-mown area.

He pushed it right twice, and, in the final trip down 18, he pulled it left. He was able to go for the green the first time, but he battled to match the par of Sturehed. He laid up the second time, and again was able to match the Swede’s par.

On the third occasion, he pulled it left, and he was rescued from another scrambling attempt at staying in it when Sturehed pushed his tee shot out of bounds. In any case, Nienaber’s heart-rate must have cranked up a notch when Sturehed nearly saved par with a 25-footer on that final play-off hole.

“It was a little tougher than I wanted it to be but I pulled it off at the end,” said Nienaber. “I’m emotional obviously. I really played nicely. The whole week is a special week. I wanted to win this event, and I have done so.”

He was unable to say anything else as the enormity of the win sank in – especially since there has been so much pressure on him to get his hands on that first trophy after he first burst on the scene.

For now, it will all be about managing expectations – and getting ready for the world stage.