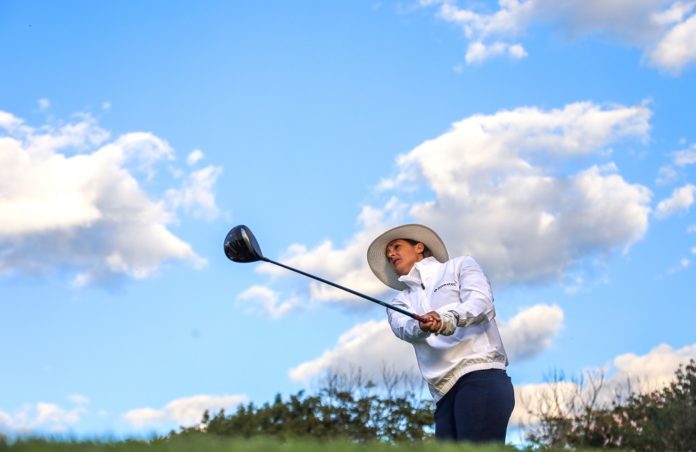 As the north-wester came up over Westlake Golf Club, Nicole Garcia held things together for a one-over-par 73 in the second round of the Investec South African Women’s Open.

Moving to level-par for the tournament co-sanctioned by the Sunshine Ladies Tour and the Ladies European Tour was good enough to give her a one-stroke lead over joint first-round leader, Lee-Anne Pace, who hung on grimly in the tougher afternoon conditions for a three-over 75 and a one-over total. Pace shares second with Germany’s Leonie Harm.

“I’ll take that score, especially with the wind coming up,” said Garcia. “I was hoping to play a little bit better today but I got a bit unlucky on a few holes. There are still a few areas where I’d like to improve. I don’t think any golfer is ever happy with the way that they have played. I’m happy that I didn’t completely blow out today. I kept it together in the wind, and that’s a good sign for the season ahead.”

With the north-wester being the win that brings the winter rains, it’s probably a good sign for Garcia for the rest of the tournament too.

In the conditions on the day, after starting her round on the 10th, she made a birdie on the 12th. But there were bogeys on the 14th and 18th, and then things started getting difficult. “We started with some really good weather this morning and I was hoping it would hold out, but when we got to nine, the wind started to pump,” she said.

There were two more dropped shots on one and three, but she made up for those with birdies on both the par-fives on the front nine to come home in a very good level-par. “I think I had a good draw today,” she said. “The front nine was a little easier with the wind. I think the last few holes on the back nine are quite difficult when you’re trying to make some birdies coming in, where the front nine you’ve got some par-fives which are downwind.”

Pace played her round from the first, and was soon waging her own battle with the wind with consecutive bogeys on two and three. She regained one of those strokes with a birdie on the par-five seventh, but she dropped again on the ninth and the 16th.

“I started getting in the zone in the back nine,” she said. “I started hitting really good shots into difficult holes, where it was all seven-irons, six-irons, five-irons into the greens. I’m hitting ball really well, and I’m making the crucial putts as well. If I can get a little closer to the hole for birdie, that would be idea. Tomorrow is going to be even tougher than today.”

The German Harm had a great day: One birdie and one bogey on the front nine to turn in level-par 36, but then things threatened to go south when she made consecutive bogeys on 11 and 12. She held it together with three pars in a row, and then, defying Garcia’s analysis of the homeward nine, made birdies on 16 and 17. The one on 17 was particularly satisfying, as it was one of only two on the day on the par-three which played as the most difficult hole on the course for the second day in a row.

She and Pace are one clear of fourth-placed Kylie Henry of Scotland, who, like Garcia, was out early and carded one of the rounds of the day with her level-par 72 taking her to two-over for the tournament, two off the pace.

In a share of fifth on three-over are South African Tandi McCallum, Spaniard Elia Folch and the woman who shared the first-round lead with Pace, Lydia Hall of Wales.

As conditions got tougher during the day, so the cut line ballooned out. In the end, it fell on a whopping 12-over.

For Garcia, it was her ability to deal with what the wind three at her which got her in front. “Coming into the greens is the most difficult part of it in the wind, just to judge where to land the ball,” she said. “It’s not easy anyway around these greens, so to judge where to pitch it so you don’t get that roll off the back is quite difficult. Often it’s a two or three-club wind, and if you’ve got a different club in your hand, maybe it won’t spin.”

With rain in addition to wind for the weekend’s action, it’s going to be quite the battle.