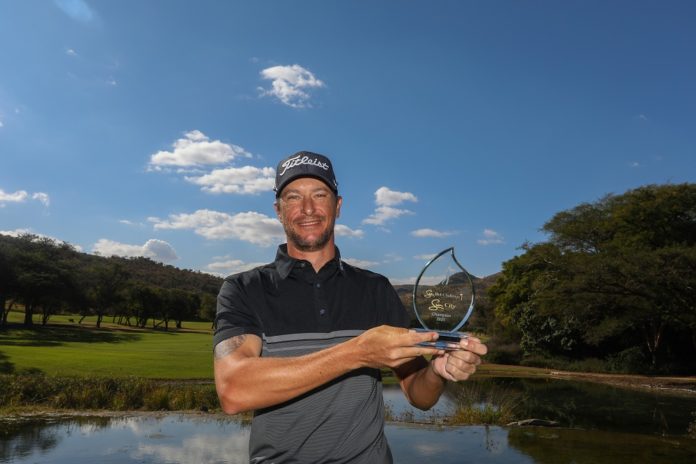 Alex Haindl rounded off a wire-to-wire victory on Friday as he took the SunBet Challenge hosted by Sun City at Gary Player country Club for his fourth title on the Sunshine Tour in a tough final day.

He edged out Zambia’s Madalitso Muthiya and Jaco Ahlers by one shot after carding a closing one-over-par 73 to signal a return to the kind of form he was showing before he had to get spinal fusion surgery for a second time to correct what had gone wrong the first time.

“I suppose my last win wasn’t so long ago,” said Haindl of his last victory which came in September 2018, “but what with sitting out the whole of 2019 after the surgery and then all the COVID-19 stuff last year, it seems like an age.

“I’m delighted. I kind of came into the week with a bit of a mission to at least have a top three finish. I’m very happy to have won, especially on a golf course like this one. Any win is nice, but a win on this golf course, which I’ve never really felt suits my game, makes it a lot more special,” he added.

He went into the final day with a two-stroke edge over Ahlers, and put his foot on the pedal right from the get-go. He made consecutive birdies on the opening two holes, and, when a third came on the fourth, he looked as if he might cruise home unchallenged.

He then bogeyed the eighth, and then, seemingly from nowhere, made double-bogey on the par-five ninth to let Muthiya through the door. “On the ninth I laid up but I was in the semi-rough,” said Haindl, “and I don’t know if I had a mud ball or something but my third shot came out absolutely horribly and went straight into the water. It didn’t bother me that Madalitso was leading going into the back nine though, because again, I just know this game and this course.

After his adventure on the ninth, he managed to cut out the errors as Muthiya and Ahlers both pushed for the win. Muthiya made a double-bogey on the 12th to slip back after a birdie on 10, and Ahlers was unable to pick up a shot on either of the par-fives on the back nine. A bogey on the short par-three 16th put paid to his chances.

While he made bogey on 13, Haindl had done enough from the opening round to be able to hang on for the win.

Veteran Ulrich van den Berg finished fourth, three shots back of the lead on four-under for the tournament, with Keagan Thomas in fifth on two-under. Keenan Davidse and Thriston Lawrence shared sixth on level-par.

“There were certainly times after the surgery that I had doubts,” said Haindl, “but now it feels as if things can start going the way they were before all the back problems started.”