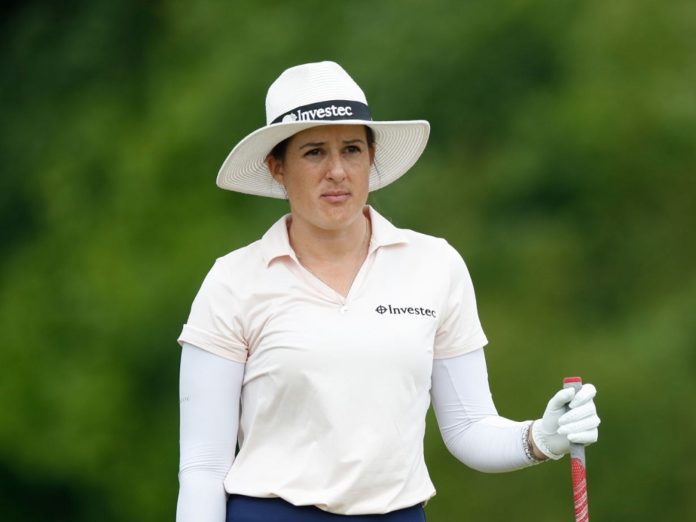 Play was suspended in the second round of the Ladies European Tour’s VP Bank Swiss Ladies Open, but Nicole Garcia got her round done and her three-under-par 69 kept her in contention in a share of fifth place.

After her superb opening 65, she backed things up with five birdies and two bogeys to move to 10-under for the tournament heading into the final round. That was just four shots off the pace being set by Germany’s Sandra Gal and Kim Metraux of Switzerland who fired 63 and 64 respectively. They had a three-stroke lead over first-round leaders Chloe Williams of Wales and Norway’s Marianne Skarpnord.

Garcia made birdie on two, but dropped a shot on the par-four sixth. She regained that loss with a birdie on the par-four seventh and turned in one-under 34. There were birdies on 10, 12 and 17, and a bogey on the 14th on her homeward nine as she shared fifth with Race to Costa del Sol leader Atthaya Thitikul of Thailand, Slovenia’s Pia Babnik, Johanna Gustavsson of Sweden and Swiss amateur star Elena Moosmann.

Casandra Hall also kept herself in the hunt as she was three-under through 15 holes. She was one of the players who will have to complete their rounds on Saturday morning, and she is currently on six-under for the tournament in a share of 17th.

Lejan Lewthwaite was also yet to finish, and, at one-under through 15, is on level-par for the tournament in a share of 53rd. One shot back in a share of 64th was Stacy Bregman after a one-over-par 73. Nobuhle Dlamini of Swaziland is on three-over through 12, and needs to pick up a couple of strokes if she is to make the cut.

It was a career-best round for the German Gal. “I felt like I was in the zone all day long and it just flew by, I have to think about what happened out there. It was the lowest round I ever shot, so I’m happy I made the birdie on 17 and I just missed the one on 18,” said the 2011 Kia Classic winner.

Metraux rolled in five birdies on the front nine including a monster putt on the par-three eighth to make the turn in 30, before adding three more on the back nine to join the German on 14-under. “It was good. I finally hit the fairway on one and two, so that was good compared to yesterday. I got off to a good start again, hit a lot of greens, made some putts and didn’t really think about anything else than hitting good shots and that was very helpful today,” said Metraux.